When you move to Hawai’i you expect to be met with a variety of different things. When I turn on my radio here all I have to do is turn the dial a little and I’m listening to the easy sounds of reggae (or “island music”). When I’m walking on the beach, after just a few seconds of scanning the horizon I get the joy of watching whales flip their tales up in the air, give a happy wave with one of their fins, or launch themselves completely out of the water.

But there are a few things that I’ve discovered about living in rural Hawai’i that I wasn’t quite prepeared for.

1. That’s not an ice cream truck you’re hearing – Where I live, just north of the center of town, some of the more lower-middle class people are my neighbors. I appreciate the community that exists in this neck of the woods, but the sounds of the neighborhood never really cease. When I first arrived back in February, I was sitting under the carport in my driveway with my neighbors when all of a sudden I heard the happy notes of an ice cream truck tooling down our street. I turned to Sam and Jesse, “there’s an ice cream truck here?” Nope. Like large construction vehicles on the mainland make loud beeping noises when they are backing up (in reverse), here in Hawai’i when a car is put in reverse it sings the happy tune of an ice cream truck coming down the street. This still catches me off guard after six weeks of living here, but I’ve decided that it makes sense. Why do we have to listen to the obnoxious sound of beeping every time we throw the car in reverse? Instead, let us drift back to the days of our childhood each time we turn our heads to back the car out of the driveway.

2. Need to make a phone call? You’ve come to the wrong place – I’ve spent all of maybe 30 minutes making phone calls since I moved to this island. Is it because I don’t want to hear from anybody from my previous life? No, it’s because the service here is so sketchy you’re better off trying to track down a pay phone, just to make sure you don’t lose your call. I’ve found myself on many occasions wandering up and down my driveway, trying to get a bit of good service, but have more often than not ended up losing the calls that I’m on. The most interesting part about the cell phone service is that you may have two bars when you’re standing in your apartment, but then by the time you’ve dialed in the number you want to call, all of a sudden you have zero bars and the call won’t go through. Alas, vast oceans, island cliffs and mountains, and general remoteness are not what cell phones need to place acceptable calls. E-mail works great.

3. That loaf of bread will be $9 please – Yes, I knew before moving here that food prices were going to be higher than on the mainland. Although, I did think having lived in rural Alaska I would have a leg up on understanding how to live cheaply. Somehow, someway, I was still blow away by the cost of food when I got here. I thought I would, at the very least, be able to purchase fresh fruit (grown on the island) for an affordable amount, but that isn’t the case either. The little old lady who sells fruits at her stand downtown knows that she can charge a certain price and still be cheaper than the grocery store.

Attempting to be vegan here has been a benefit to me – it’s cheaper to eat rice and vegetables every night than to pay the price for cheese, eggs, and meat.

4. Yes, that ten year old did just curse – The Hawaiians, at least on this island, tend to speak very quickly, and they’ve moderated the English language into Pigeon, so it’s sometimes difficult to understand what they’re saying if you don’t pay close attention. Walking around town when I first got here, I would sometimes pass groups of kids walking down the street together. In passing, I would overhear some of their conversations and didn’t realize that I was hearing the “f-bomb” being dropped multiple times per sentence. Again, with their different accents and fast pace of speaking, I wasn’t sure what I was hearing, but it turns out, indeed, even the little kids curse their little heads off more often than I could have ever imagined. It’s just nicely blended into their sentences, well disguised. 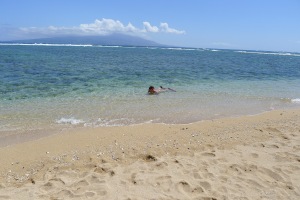